Jason Davis is a NY guitarist, songwriter, and music professor who has written & recorded music for programs such as "Saturday Night Live", "WWE Raw", and "SportsCenter".

His pop/rock sensibilities, acrobatic guitar antics, and idiosyncratic sense of humor are on full display on his latest album, Guitar Flambe!

“I just wanted to unwrinkle my forehead and play fun music again.”

Reflecting on the past, guitarist/songwriter Jason Davis would probably categorize much of his previous music as being on the serious side of rock. “I somehow got it in my head that I had to play music that, at times, challenged the listener or at least tried to come across as more cerebral and different. I started to ask myself, ‘Why am I doing this?’ I decided that I just wanted to unwrinkle my forehead and play fun music again.”

Davis' latest album, Guitar Flambé!, finds him doing just that. In place of dramatic textures and melancholy lyrics exist arena rock riffs and themes concerning romantic mishaps and blunders (“Love & Misery”), the electric power of rock 'n roll (“Live Wire Swing”), and odd-toed ungulates (“Ok…Who Let the Rhino In?”). While Davis tips his hat to the songwriters and artists that have influenced him over the years, the music is never derivative, always injected with his idiosyncratic spin on what some may dub a "classic rock" vibe. His acrobatic guitar skills are ever-present but in a more playful and concise manner. He even throws in a Kelly Clarkson cover to boot!

Davis has been fortunate as an independent artist with many of his songs have appeared in television and cable programs such as “Saturday Night Live”, “WWE Raw”, Dancing with the Stars”, and “The Tonight Show”. He has performed and toured with artists as diverse as Reeves Gabrels (The Cure, David Bowie), MC Lyte, Clay Aiken, and Cee-Lo Green. Davis has also had artist relationships with Reverend Guitars, Railhammer Pickups, Supro/Pigtronix, Source Audio, and others. Yet, he had been musically dormant for a number of years, with his last release being the 2014 live album Live + Loud on Lincoln Avenue. One of the unfortunate contributing factors was the early development of osteoarthritis in his fingers, hands, and wrists. “I went to my doctor and two different specialists and was told that there was nothing they could do for me. One even said to get my guitar playing in now because I might not be able to in ten years.” Tired of pain and frustration, he began making changes. “I spent about two years relearning how to play the guitar: holding it differently and analyzing my technique. I reinvented my entire style and technique. People may not notice, but I can hear and certainly feel it.”

After years of reflection, discovery, and overcoming challenges, Guitar Flambé! is the result. It's one that refocused Davis on the music that influenced him and that he still loves. “An artist always wants their audience to appreciate what they’re doing, but you have to love it first and make yourself happy. Listening back to these tracks puts a smile on my face.”

This twelve-song collection is chock-full of arena rock riffs, catchy melodies, moments of lyrical humor, and tons of guitar acrobatics. Featuring the Texas blues revelation "(The Whole World's Done Me Wrong, But) My Guitar's Done Me Right", a tribute to the glorious music of "1973", & the six-string rollercoaster ride of "Ok...Who Let The Rhino In?" 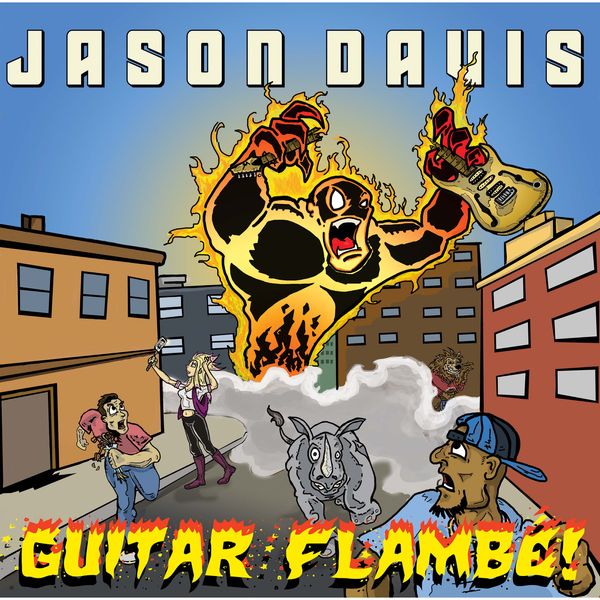